God called Eve Adam’s “helpmate,” and as a helpmate myself, I take my job seriously.

I help my husband drive

I help my husband dress.

In fact, I don’t know how he’d get anywhere if I weren’t in the car telling him where to turn and when to slow down. If it weren’t for me I’m pretty sure he’d wear sweat pants and a dirty tee-shirt every day of this life. He needs me, or least that’s what I think. He doesn’t seem to agree, however.

I don’t understand why people can’t just accept my control as not only inevitable, but necessary.

He thinks he can do it all by himself

I know what to do, but I just can’t seem to do it. And what I do, I hate. See, I know that he doesn’t like it when I show him how much smarter I am than him, and I know that “Let me help” is just another way to say “You wanna fight?” So I try desperately not to “help” him, which is so counterintuitive that I can hardly hold my tongue. For example, while he’s driving down the street talking, I often don’t hear a word he’s saying because I’m just thinking, Please take this next left. It’s so much quicker than going straight. But I bite my tongue as he continues to talk and when we get to the light, unable to take it any longer, I squeak, “Aren’t you going to take Andrew Wilson Parkway?” quickly so as not to interrupt him for too long.

To which he says, “Okay, so I guess it’s more important to direct me than to listen to me. Have you learned nothing?”
No!!

“Oh, no, I’m very interested in your story. I’m so sorry I interrupted you. Please go on.”

Growth: not always saying what you are thinking

I’ve learned my lesson, kinda. So last week I tried a new sentence configuration in order to get him to do what I wanted him to do without him feeling like he’s doing what I wa t him to do.

The male brain is a very delicate thing; you must always figure out how to make them think what they are doing is their own idea, otherwise it’s considered “control,” and for some odd reason they just don’t like to be “controlled.” It’s a flaw in their DNA, I think. So I say, “I found out that turning here shaves five minutes off getting to the freeway.” To which he grunts and says, “Ah,” as he continued on his merry strength way, leaving me to look longingly at the left turn and we should have been in.

The truth is that whenever I’m not in control of the situation, I’m looking for any opportunity to take control simply because I know things are faster, safe, smarter, and more comfortable when I’m in charge.

But when we yearn for control, it is because we are discontent with how things are going. And this discontentment speaks more to who we think God is than of whom we think they are.

When we can sit back and trust that God can speak to the other personal as easily as he can speak to us, when we can trust that our ways are not the only ways, and that loves lets other be wrong sometimes, it won’t be the end of the world. It just means that it might just take an extra five minutes to get there. A quiet heart is a joy to possess.

Excerpted with permission from the book A Woman Overwhelmed: Finding God in the Messes of Life by Hayley DiMarco (Abingdon Press) Copyright ©2017. 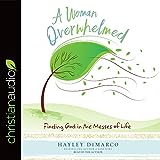 Hayley DiMarco is the best-selling author of more than 40 books, including her latest A Woman Overwhelmed: Finding God in the Messes of Life and its companion Bible study on the life of Mary, the Mother of Jesus, and multiple books in the God Girl line, The Fruitful Wife, Obsessed, Die Young and Own It. As the founder of Hungry Planet, a company intensely focused on feeding the world's appetite for truth, DiMarco speaks regularly for women’s groups and events, including Women of Faith, dotMOM, Precept National Women’s Convention and MOPS International.  Hayley and her pastor husband, Michael, live outside Nashville with their daughter and four dogs.  To learn more about DiMarco and her books, visit her online home HayleyDiMarco.com. She can also be found on Facebook and Twitter. 4 Expectations That Injure a Marriage