We caught up with the best-selling band, Leeland. Leeland has released three studio albums, and received a Grammy Award nomination and two Dove Award nominations for their debut album Sound of Melodies (2006). The band’s third album, Love Is on the Move, was released on August 25, 2009.

What’s happening with Leeland?
(Jack) We’re busy. We’ve been doing a lot of international stuff the past few months. We went to Europe and Brazil — and we’re going back to Europe next month — and a lot of dates here in America, too.

Jack, I heard you and your wife have a new baby?
Yes. We have a four-month-old, a little chunky guy. His name is Smith. He’s amazing, and a load of fun.

I think Bebo Norman also has a son named Smith?
I heard that, yeah. We thought it was a cool name. It was my wife’s maiden name and then one of my favorite preachers is Smith Wigglesworth, who was a British minister back at the turn of the century. It’s fun, being a daddy.

How does that change the whole traveling thing?
It’s definitely a lot harder to leave home now. We try to do video chats as much as possible so that I won’t miss anything. My wife and I actually took Smith on the bus. We put him in the back lounge, set up his Pack and Play and he loved it. He’s destined for the road.

(Leeland) Life is full of seasons. This past year has been good for our marriages and families. We’ve been able to stay home more and pick and choose our dates a little more, instead of taking everything we can get and being gone from home for a long time. We’ve taken the family out quite a few times this year on trips — my mom and dad have gone with us, and my wife, too.

What do you guys hear God saying to the group these days?
(Leeland) I think God is trying to speak into all of our lives to personally draw closer to Him. I think he’s trying to encourage us to step outside of our limits and boundaries. It’s easy to get comfortable doing concert after concert and not keeping the fire inside of you. We’ve been praying for God to give us new ideas and expand our vision on the tours. Not just for the sake of doing something different, but that God’s Kingdom can really come and move.

We don’t want to be another band that just plays at a bunch of shows — that’s really not going to count for much. We want to have fruit at the end of our lives that will last. The book of Corinthians says that God is going to try all of our works at judgment with fire, and if they last, they’ll stay. If not, then we’ll suffer loss and enter into the Kingdom of Heaven empty. We want to make sure that we’re doing what God has called us to do and bearing heavenly fruit that’s going to last and stand.

How do you guys stay fresh?
Prayer is most important.  Mother Teresa said something really cool: “Your prayer life is what cradles your relationship with God.” Leonard Ravenhill, another minister, said, “I don’t care how many people they speak to on Sunday or how many people they sing to; I’ll tell you how close a person is when you let me look at their prayer life.”

The enemy’s number one weapon is to distract us from our prayer life. If he can get us to not talk with God and lose our focus, then he can make us ineffective for the Kingdom. That’s especially important, traveling like we do, away from our families.

We’re all very involved in our churches at home. My mom and dad are pastors in Baytown, Texas; Mike, our drummer, his father is a pastor; and Jake, our bass player, his mom is an associate pastor. We’re all plugged in.

When we’re away from church, we strive to help each other stay accountable, to encourage each other to be in the Word of God and in the presence of God in prayer. That’s important, because when your mind is in the Word, it’s a lot easier to combat the arrows that the enemy tries to throw at you every day.

What do you guys listen to?
(Jack) I just downloaded the new Hillsong record, The Beautiful Exchange. It’s amazing. Gosh, it’s got some good songs on it. Michael Gungor, his latest record is pretty incredible: Beautiful Things. Jason Upton’s record, we’ve all been listening to that.

All of you are married?
(Leeland)  I’ve been married a little over two years. Mike has been married for the longest, almost four years now. Even our road manager/production guy, Marcus, is married. So we’re all newlyweds and trying to learn how to do it right together.

What does “doing it right,” mean?
We’ve all found when you have God at the center of your marriage, all things are possible, and God will have His grace on your marriage  — everything else will work itself out.

What do you and your wife do to make spiritual intimacy happen in your marriage?
(Leeland)  I try to have those times with my wife where we can seek after God together.  Serving together is important too.

(Jack)    My wife and I are reading the same book. A guy named Mike Mason wrote a book called Mystery of Marriage, which is incredible. Also, we’re reading Mystery of Children,  which is the childrens book he wrote. We’ll read the same section every day, and even though we’re separated we’ll talk about it at the end of the day. It’s not a whole lot, but at least it’s something we can share as a spiritual connection. It gets us talking. Little things like that help when I’m on the road.

When is the last time you and your wife had fun?
(Jake)  About three or four days ago we visited my dad in a town called Fredericksburg — this old German town in Texas. We went to this event they call “Old Night in Fredericksburg” where a bunch of people wear lederhosen — like German suits — and they play polka music. We had our little nephew with us for the weekend so we hung out with him. We took him on the dance floor and we were all dancing to the polka music. It was the weirdest thing I’d ever seen in my life, but pretty fun.

Any chance of seeing any lederhosen today?
No. No chance. 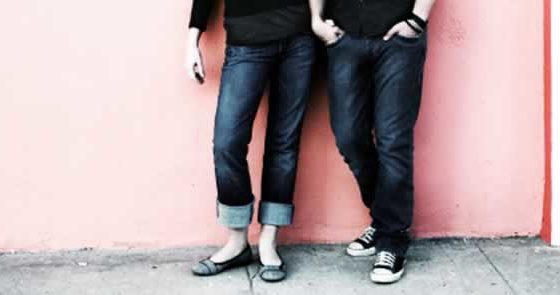 The Surprising Way to a Stronger Marriage